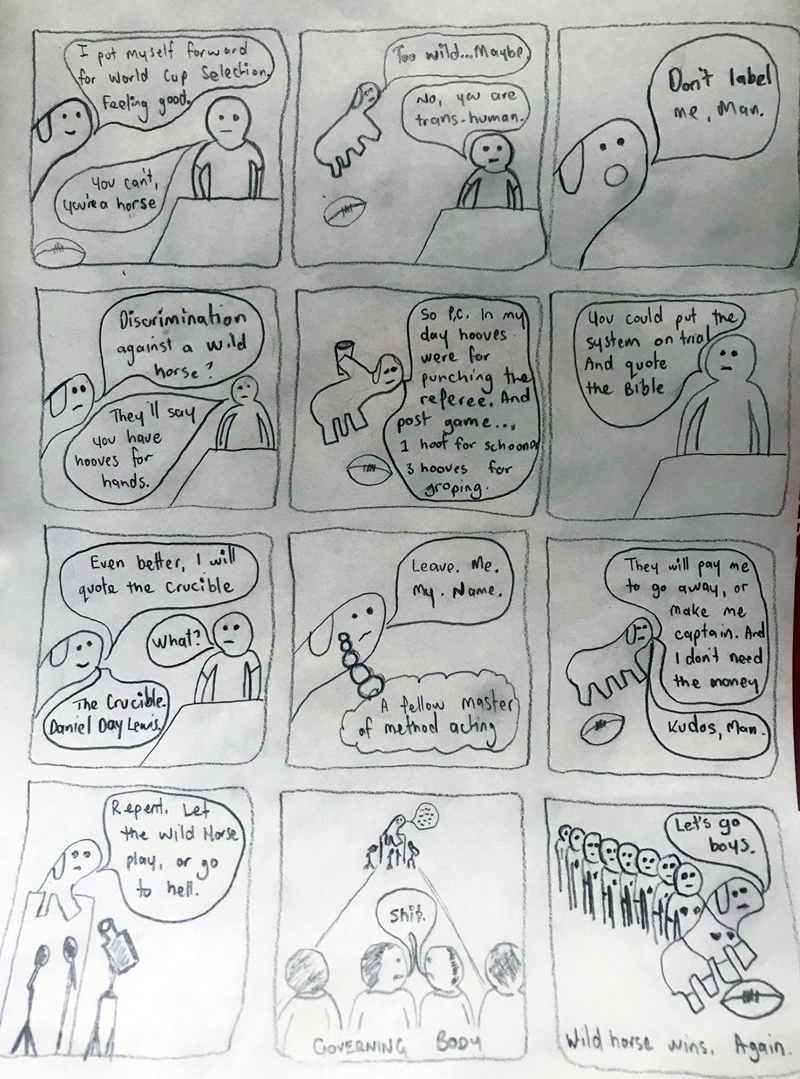 For all fans of Australian rugby, most can agree that there hasn’t been nearly enough off-the-field political drama recently. This comic takes us back to the golden age of rugby (AKA right now) where the sport took a back seat to press conferences, open letters and go-fund-me pages to settle legal disputes… The point is the World Cup is about to start in T-minus not very many days, and people are getting seriously fired up! I walked into work the other day and straight away some bloke took my bag and threw it out a 5th story window. Because of the rugby. No other reason, he said.

This masterpiece was sent in by a man who describes himself as “a student of the human condition”. His name? Joe. His fabric? Tweed. His scent? Spicy lavender. “But Joe, what even is the human condition?” I hear many of you ask. “Well I’m glad you asked,” says Joe, sitting at the bar, licking his lips. You’ve fallen right into his trap. “During my time studying at Oxford University…” and he’s away on a highly impressive tour de la campagne… you smile and nod along as you desperately try and think how you can weave in some of your own impressive accomplishments. What about that time you drank a whole carton of beer to yourself? That’s got to be tenuously linked to the human condition somehow?

“…and sport really taught me a lot about that – oh silly me I forgot to mention I was a professional athlete…” You have to beat him. What about that time you found an unlimited free car park in CBD? What about that time you sneezed 13 times in a row and proved you don’t have an orgasm? What about that time you ordered uber eats while you were in a regular uber and your food arrived at the exact moment you arrived home? “You’re missing the point” says Joe who can also read your mind because he learned how to do it on some awesome trip to Nepal or something. “By trying to beat me you’ve already lost to me. That is the chief symptom of the human condition.” You’re not smart enough to know if that makes sense or not, so you agree.

Joe also wins the honour of getting me to type “Daniel Day Lewis” into google. How is that old scallywag, I pondered? Is he still displaying that mercurial intensity for which he is known? Yes. I can confirm that he is. But why would Joe, a man who regularly displays Daniel Day Lew-like selectivity in his credit-giving, give old Danny-boy a reference? And then I saw it: “In October 2012, he donated to the University of Oxford papers belonging to his father…” I knew it! In return for his rad dad papers, the Oxford Uni promised Daniel Day Lewis a Wild Horse shout-out through one of their alumni connections! I feel greasy all over!! And I like it.

If you would like to submit a comic of your own, send it to:
Wild Horse’s Inbox!
(or message me on facebook)