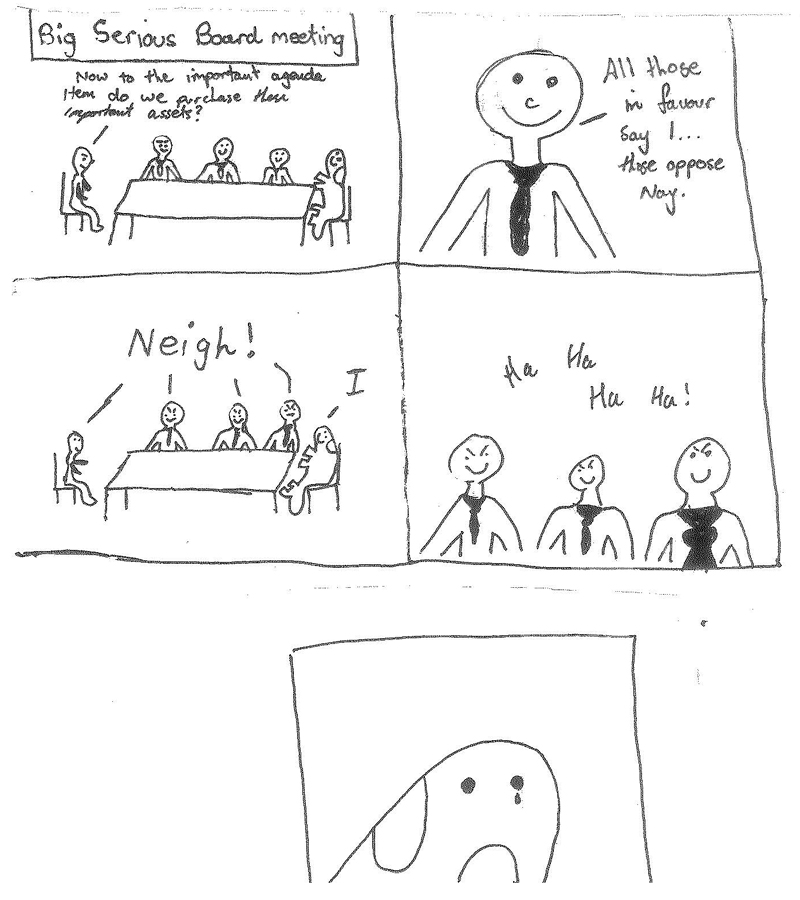 This comic is another one that falls into the category of having been sent to me over six months prior to me putting it up on the website. The reason for this is that I suck at things. Oh well. This comic was written by a man, nay a legend: Daniel Bowen. You might remember Daniel’s last comic Sweet Future which followed his running theme of corporate greed. I love it when artist’s tackle the big issues. Following the last comic I also explained that I only refer to Daniel Bowen as “Bowen” because it takes me back to my favourite film of all time: Dragon Heart.

In his new comic Bowen has shown more of the metaphorical illustrating style that won him the admiration of the fans last time. For example, note how the double Windsor knots of the board members seem to grow with their inflated menace. See how the final panel is isolated from the other four showing Wild Horse’s isolation from the rest of the board. Examine how the last box has no bottom, showing how although the comic has finished the story never will. Bowen is genius.

This comic is actually being sent on the eve of the closure of another chapter in my life. This chapter I will call “decadence”. About a year and a half ago my brother decided to live in Japan. This was fantastic for me because he had to leave heaps of his clothes, his car, his room and all the worldly possessions that he couldn’t fit in a suitcase in Australia. Simply put, they were mine. Now that he is about to return I am going to have to learn how to live without wearing his suits to bars, cruising in his lancer, or spreading out over two rooms. He has unfortunately already seen a photo of me in one of his suits and sent me a message to inform me I’m going to be “buried in that suit”. Should be a good reunion.