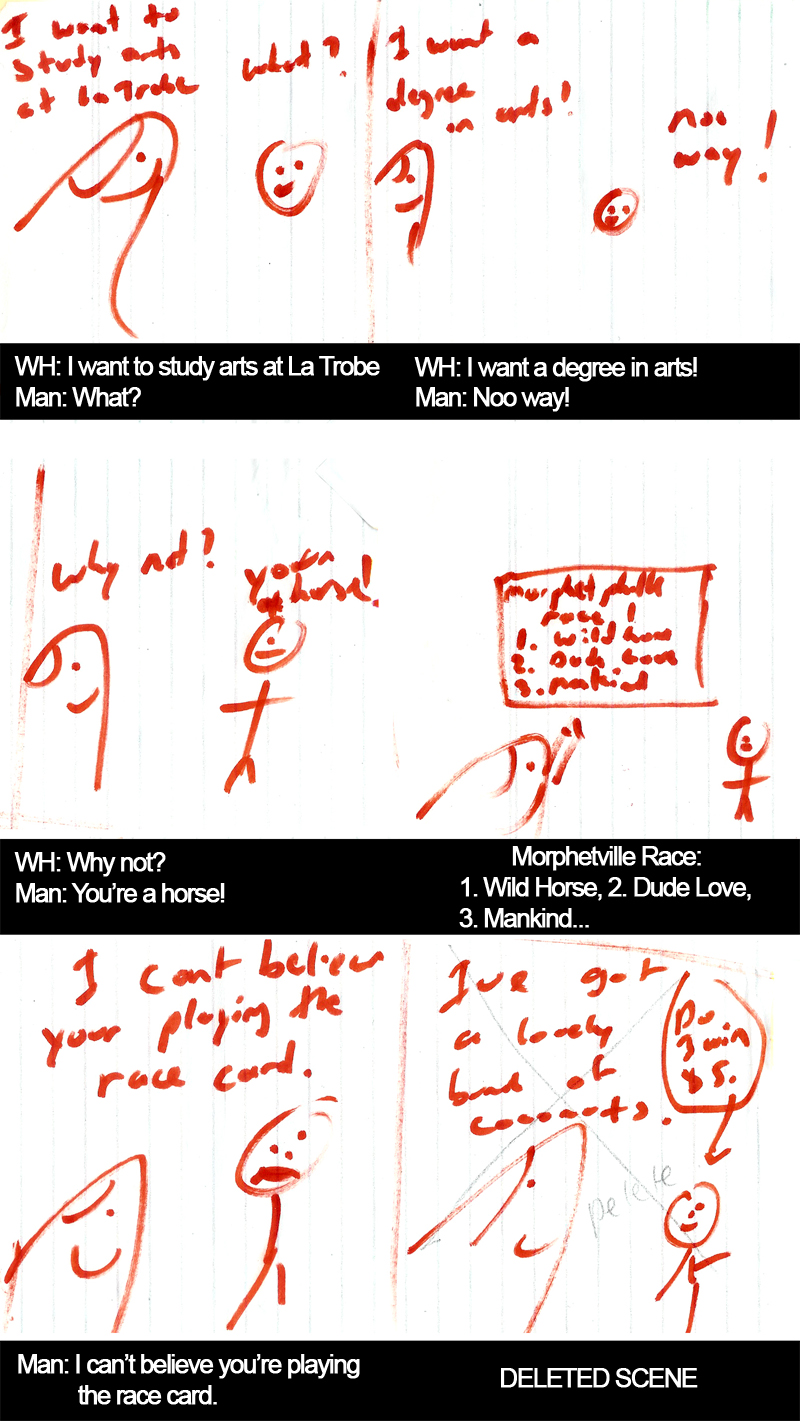 Yo! We are back! Allow me to announce my triumphant return to comics! Well, actually this a guest comic but I think the signs are all positive. I’ve started a new writing technique whereby I get all my friends to stand around my desk and continuously shout objects/places/concepts/words at me while I write a comic. I call it the “circle of power”. It sucks.

What doesn’t suck, however, is this week’s guest comic which was written by my uncle Damo on his Wild Horse maiden comic voyage. You may notice some of Damo’s trademarks scattered throughout the comic: red texta (“the fastest of all the textas” – Damo), floating heads without their bodies drawn, and illegible writing. It’s all very deep and meta. To help the layman I added in a translation. But feel free to just look at the pictures if you want. Pictures are awesome.

Controversially I have included a deleted scene tacked onto the end of the comic like some sort of DVD bonus feature. The comic was originally drawn and completed in 5 boxes, but Damo later decided to throw a curveball and added a seemingly unrelated and off-track epilogue to his masterpiece. Naturally this confused and enraged onlookers in no small way and became the subject of heated discussion throughout the remaining night/early morning. “Surely that shouldn’t be there?” they pondered. “IT MAKES NO SENSE!” someone declared. “LETS GO WAKE UP DAMO AND MAKE HIM EXPLAIN HIMSELF!!”, by this time Damo had long since gone to sleep and the only people still up were running on increasingly cheap wine.

Finally, someone (identity withheld) decided to take charge and, using the angriest HB pencil I had ever seen, drew a huge cross through the final panel. The person then dropped their tool, fell to the floor and wept. Later we played table tennis.

But let’s talk about Damo. Damo is the kindest most generous man in the world, he brings you gifts, tells you about cool books to read and tells you how happy he is to be your godfather. But unfortunately you need to be his godson for him to do that, and I’m not that. My brother is. So from my perspective: Damo is a cruel man who gives your brother cool gifts to make you jealous, tells your brother about cool books to read and comments how much he prefers being your brothers godfather than yours.

Luckily, Damo made up for all that with 5 simple words: “What are your three favourite nuts?”. What a question! At first you don’t even know where to look for the answer! Almonds? Are they too boring? Pistachios? Too annoying to open? Cashews? But are they top 3 material?! Then someone says “brazil nut” and everything changes. You start remembering nuts you’d long forgotten. You start questioning what sort of person you’ve become. This is a question that defines you and can’t be answered lightly.

I would give you the Wild Horse top 3 nuts but I don’t want to be controversial. Oh wait, yes I do. So here you go:

1) The humble peanut. You read that correctly. You can argue all you want but first show me another nut that makes butter. (Just did a quick google search and apparently there’s “almond butter” but you just know it sucks). Also the fact that you get two peanuts from each peanut shell is both rewarding for your effort and romantic. Next valentines day get your lover a bucket of peanuts and eat them together. Best case you’ll impress a girl/boy, worst case you’ll eat a lot of peanuts. Win win.

2) Walnut. Oooh you’d forgotten about these bad boys. Let me get the bad stuff out of the way first: Firstly, an off season walnut is awful. I once at a walnut with creepy crawlies all over it but in hindsight that might not have had anything to do with the season. Secondly, they are a bitch to open. It’s like they don’t want to be eaten or something. But here’s the thing: anything with a shell that hard is obviously guarding something delicious. And yeah. It’s delicious. And it’s a big nut too which I find very endearing. Not to harp on the romantic side of nuts again but when a girl sees you pull out your nutcracker/gun and get to work on a walnut, no amount of walnut shell in the world could keep her from you.

3) Coconut. Solely for the reason that if you drop a coconut in a nut conversation you instantly become the cleverest person in the room. In terms of the taste, I find it underwhelming without rum and pineapple juice.

Special thanks to my guest artist Damo for the awesome comic. Race card! Genius!

More updates will resume soon like they did back in the good old days.