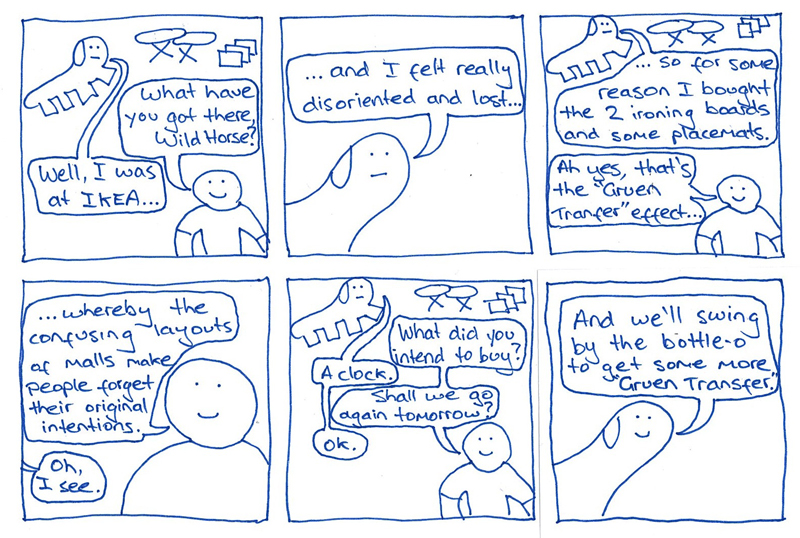 This is a comic from a man. Some people call him Greg. Others don’t even know his name because they have never met him before and so presumably would refer to him by whatever eye-catching piece of clothing he happened to be wearing at the time. I do know him so I call him Greg. That’s pretty much the extent of what he gets called.

Greg took Halloween to a new level this year by dressing as the worlds tallest man. To do this he obviously needed the use of stilts, but because Greg has never used stilts before and because he is very uncoordinated (he gets dizzy whenever he turns more than 160 degrees at a time) Greg actually hired an ex-circus performer to go to the Halloween party dressed as him dressed as the worlds tallest man. To make sure he was still part of the action he wired up his imitator with an earpiece and a camera on his head so that he could sit in front of his TV and order his goon around the party. Apparently it was a great success and he even got lucky (chicks dig tall guys).

I happen to think this comic will be great for getting new website traffic from people who google search “ikea horse sculpture” or “ikea wild strawberry”, both of which exist. IKEA kind of creeps me out in that I know it’s a company based in Sweden (which I associate with being a bit of a paradise) and I have a rule that I never buy anything that was made by people potentially having a better time than me. I basically think “If I made that table I would probably do a really shitty job because I’ve got parties and girls and beers”. So if these Swedes have even more parties and girls and beers than me, chances are that’s gonna be one pretty poorly made table. Also flat packs, am I right?

Apparently some people even rely on IKEA as a means of food, and I have heard more than one person confess to me that they went to IKEA specifically for the meatballs. They obviously came home with several new lamps and a desk, but they were really only in it for the balls. I have had IKEA meatballs and while I would eat them again, I wouldn’t get out of the car for them, and I certainly wouldn’t walk through IKEA’s creepy furniture maze where you are assaulted with clever ideas and amazing space-saving strategies.

In other news, apparently the big storm in America has sparked the beginning of some crazy horse-cult. I don’t know much about it as of yet but Millie managed to send me this snapshot from the news cam:

Given how happy that horse-man looks, I definitely want to get involved.