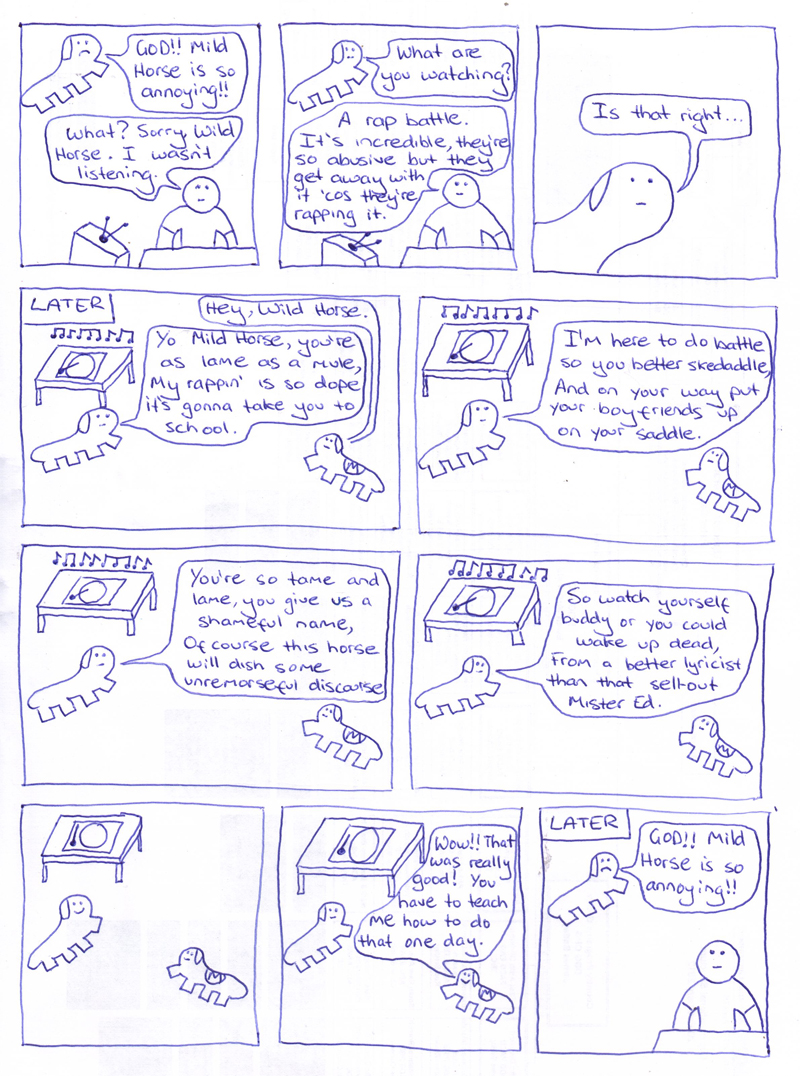 Another comic from the Great Provider of the East, GREG!!! It seems the whole world is getting a bit more ghetto these days. From all accounts, Canberra (where Greg lives) is now a cesspool of smack dealers, t-shirts that are too big, and dialogue that rhymes with itself. Oh, and females are now apparently called “ho”s, as opposed to “bitches” as it was when I grew up (there’s just no respect anymore!!). Admittedly the phenomenon has even made it’s way to Wild Horse HQ, and just last week I was commenting on the many similarities in the upbringings of 50 Cent and myself.

It’s quite interesting that Greg wrote this comic given that his father was once a notorious american rapper/gangster himself. “Ray-Z”, as he was known, grew up in queens selling crack to the shorties to pay for studio time. He had just released his first studio album “Hard Cock Life” when things started to turn sour between his crew, the guys who wore mainly red colours and burgundy shades, and the other crew in town who were more fond of yellow because they had good tans and could pull it off better. Ray-Z didn’t mind fighting these tanned assassins but left town when Greg was born so that he could lead a safer life in Australia.

Unfortunately, tragedy struck when the leader of the guys who wear mainly red was shot down and Ray-Z was called back in for one final revenge raid on the the mellow yellows. This occured when Greg was just 3 years old and so before he left for America, Ray-Z, knowing the many dangers that lay ahead of him, wrote a sweet poem to his son in the event that he did not make it back alive:

SUP BABY GREG ITS YOU’RE BOI RAY-Z,
HITTING YOU UP WITH A LYRICAL EULOGY,
IF YOU ARE READING THIS THEN AWWW SHIIIIT I MUST BE DEAD,
LYING IN QUEENS WITH TEN BULLETS IN MY HEAD,
YOU NEED TO GROW UP STRONG, LEARN TO USE A GUN,
LEARN TO PICK UP CHICKS LIKE I PICKED UP YOUR MUM,
LOOKING AT YOU NOW, AND I KNOW YOU’RE JUST THREE,
BUT YOU BETTER NOT GROW UP TO BE A MASSIVE PUSSY,
YOU MIGHT WANT TO CHANGE YOUR NAME FOR A START,
GREG’S KINDA LAME, HOW BOUT G-UNIT OR… NIGEL SMART?
I BETTER STOP NOW OR ILL BE RHYMING FOR HOURS,
ITS OVER, I’M GONE, POPPED LIKE CHAMPAGNE SHOWERS.
YEAAAAAH… RAY-Z YO!! (FROM BEYOND THE GRAAAAAAVEEE!!)

It brings a tear to the eye. Fortunately Ray-Z made it back home safely and later became quite a good grass court tennis player.