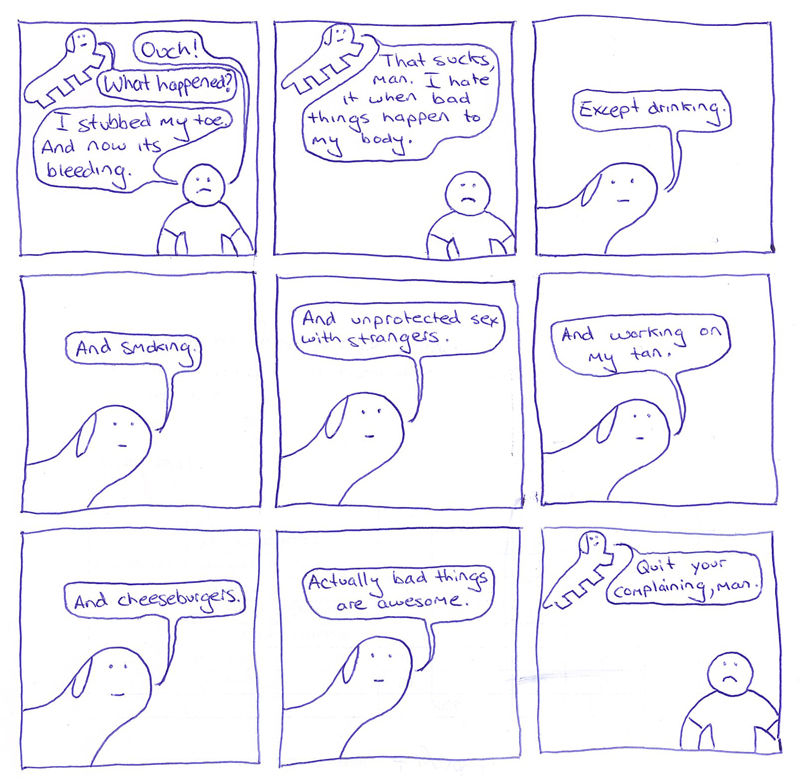 Edit: According to Greg, this comic is dedicated to Aaron Sandilands

It’s the Monday after a long weekend, so you all know what that means… Wild Horse is unconscious! I asked if he wanted me to put up this week’s guest comic and he grumbled something at me which I interpreted to be “yes please, Man. I appreciate you helping me out on this occasion.” What a polite horse he can be when he can’t form discernible words.

This comic, as you have probably already guessed, came in from the legendary GREG. Greg was in town again this weekend and he and Wild Horse took the opportunity to go drinking. I, on the other hand, used the long weekend to do some work around the house, do some gardening and watch all the exciting sport that was on. I’m obviously talking about the Nordea Masters golf tournament in Sweden, and the Bramham International Horse Trials in England.

Unfortunately the TV only showed B-grade sporting events like the Euro 2012 soccer championships, the AFL footy, the international rugby, the French Open tennis and some basketball game between Ireland and the Miami Warmth. Miami had some French dude called “Le Bron” which I think translates to “The Bron”. The Bron was pretty good at putting the ball into the cylindrical object which was somehow connected to the scoreboard. But I was unimpressed because due to all this rubbish sport that nobody wants to watch I had to follow the horse trials on the internet. Fox Sports, get your act together.

Apparently his "end of civilisation" line lines up with the one on the Mayan calendar.

Anyway, another big thankyou to the superstar Greg for another awesome comic! To everyone else: send one in yourself!